The guest curators consist mainly of influential programmers and bookers from different European and African countries.

In September 2015, Olivier Bas joined the Studio des Variétés as head of the creative division, a structure dedicated to the development of contemporary music artists.He has previously had various roles in the record industry and is part of the “Nouvelle Star” jury panel.

Born in Sarajevo, Dženan Čolpa relocated to Switzerland after deciding to launch Diapazona with the intention of promoting alternative, underground and under-exposed artists from all over the world.

After several years in the music industry (production, management, communication), Stéphane took the lead of l’épicentre, a venue in Collonge-Bellerive, in the countryside of Geneva, in 2004. Since then, he has been collaborating with various festivals and presenting confirmed and emerging artists from all over the world.

Jess White is a creative and dynamic event producer, manager and booking agent, providing a platform to music, the arts and creative expression in South Africa, the region and beyond. In 2014, he founded Akum Agency, an independent artist management and booking agency, promoter and creative production company.

Sandro Bernasconi has been directing the music program of Kaserne Basel since 2009. In 2010 he launched on the Kasernenplatz the first edition of the Polyfon Festival Basel (www.polyfon.ch / former Open Air Basel). In the 90s till 2007 / 2008, he was active as musician and DJ in several projects in Switzerland. He’s on the board of the Swiss Bar and Club Commission, and also programs for the LabelSuisse Festival (https://labelsuisse.ch )

Currently Artistic Director / Programmer of Francofolies de la Rochelle and co-founder of the management and publishing company ORA, Pierre PAULY is passionate and committed for music for almost 20 years: to the management of halls such as l’Echonova or the Zénith du Grand Nancy, he is also at the lead of so much festivals as Michel’s Garden, Rêverie Moderne, Hivernales du Jazz, as well as concert production and artist development at Prodige Music, Evolution Prod and Nouveau Monde.

Passionate about music, performing arts and literature, Dominique Rovini has been active in the cultural field for several years in Geneva. In 2011 she co-founded the club La Gravière where she was a programmer for 6 years and also contributes to several editions of the Antigel festival. In 2016, she launches the label “We Can Dance it” with Albane Schlechten to promote equality in the night culture scene. Committed to the artistic scene and aware of the issues related to gender inequalities, she co-directed for two years, then directed Les Créatives, a multidisciplinary feminine and feminist festival, which welcomes more than 150 artists and guests at each edition in about fifty venues in different cities in Switzerland.

Marco Perales has been working in the industry since 2008 as a co-founder of booking and music management company Cityzen Music. Based in Madrid, currently managing and booking landmark world music artists such as Oumou Sangaré and Cheikh Lô. Marco has a flair for predicting the Next Big Thing and an ear that’s fine tuned to match up artists in amazing cross genre projects. His company is also involve in several Spanish festivals as booking and producing agent.

Sébastien Lagrave has a degree in Philosophy and has also been awarded a prize in music theory and lyric art from the Conservatoires de la Ville de Paris. He has been a lyric artist for ten years. In 2012 he takes the direction of the association “Africolor” since 2012. Since then, he has been developing cooperation projects combining culture and development in Mali and Grande Comore around the festival, which is considered the European reference for African music. President of the Free Zone network between 2016 and 2018, he participated in the ministerial working group dedicated to traditional and world music. In 2018, he was made Knight of Arts and Letters.

Co-Founder of B-Sides association in 2006. Based in Lucerne, Switzerland. He is responsible for the programm of the B-Sides Festival and the development of the B-Sides networking plattform SAY HI!, both together with Jennifer Jans. In 2018, also founder of Other Music Luzern (OML), a network platform for Lucerne-based musicians. OML started with the goal to connect the local artists better amongst each other and more importantly to help emerging artists from the region of Lucerne to get better connected and more visible in other regions in the country and also abroad.

Journalist and programmer, Julie Henoch works freelance. Through her agency, POWA, she has accompanied several Swiss artists including Olivia Pedroli and Vincent Hänni. She is the co-founder and co-director of the NODE Festival, dedicated to sound curiosities, as well as concerts at the Cityclub cinema in Pully, in the Lausanne region.

Native of Reunion Island, painter, passionate about cinema, arts in all its forms. Based in Paris, Priscilla took part in the creation in 2008 of the Dionysiac Tour agency, show producer, label, publisher. She is a permanent driving force for the discovery of new talents! Grèn Sémé (Reunion Island), Imam Baildi (Greece), Markus & Shahzad (Pakistan/France), Make-Overs (South Africa), Marina Satti (Greece/Sudan), and recently Ladaniva (Armenia). Dionysiac Tour provides the best possible support for the development of its artists and devotes all its efforts to making each artist feel as much at home as possible.

Edu Garcia has spent the last 15 years pushing and promoting the most forward thinking sounds from around the globe, be it through his agency/promotion co. Giradiscos, as head of Villamanuela Festival, as curator for some of Madrid’s most important cultural centers or as artistic director for Madrid’s very own San Isidro festivities.mportants de Madrid ou en tant que directeur artistique des festivités de San Isidro à Madrid. 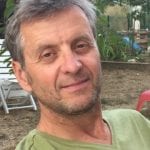 Manager of the Studios de la Seine since the 90’s, Freddy sympathizes with many French directors/mixers thanks to the equipment that the studios offer in Paris, he then becomes the manager of M (Mathieu Chédid) and launches his career.  Since 2008, the agency operates in the heart of Paris under the brand SOYUZ more than 700m2 of recording and mixing studios, but also post-production rooms. Since 2019, the agency has been enriched by a branch dedicated to music for the image, FLAM SOUNDTRACKS. He is also co-founder and programmer of the PLUIES DE JUILLET in Normandy.

They prefer to talk about shows rather than concerts. This is normal since this duo – made up of Alexinho, a beatboxer from Nantes, and Maras, from Bordeaux – loves music as much as poetry, theater and plastic arts.After a first six-track EP, “Le sixième verre”, Maras unveils today the colors of “L’Espace-temps”, recorded in...

A soft voice that echoes itself, beats and loops, lyrics in French, English and Tigrinia that evoke a dark universe with an undeniable freshness: Segen’s strength is her vulnerability. “Vulnerability as a cure” is the credo of this young Eritrean singer from Geneva, who studied in a choir. Her first digital EP released in 2020...

With a Master’s degree in composition from the University of Arts in Bern, Lakiko seeks to awaken buried parts of human consciousness through her music. Lana Kostic uses her cello and her magnificent voice to take us on a stroll through her soft and dark universe. She studies how brainwaves react to music and uses...

Multi-instrumentalist and autodidact, the Lyonnais Victor Marc, proposes a singular and surprising indie-pop music of Anglo-Saxon inspiration. Between old-school rock, folk and urban music, he plays solo, accompanied by a virtual orchestra concentrated in a looper. Thanks to nonchalant reverb effects, a vintage guitar sound, lyrics largely in English punctuated here and there by a...